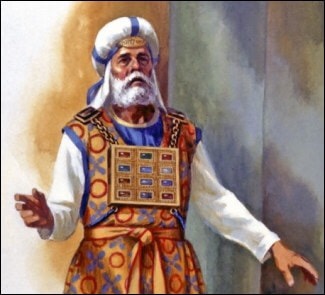 The The Jewish High Priest’s or Aaronic Breastplate was a potent Biblical phylactery that was at once a sign of authority and piece of spiritual protective technology.

Aaron was the first high priest of the Temple at Jerusalem to have worn this breastplate, several centuries before Christ. It was later worn by the High Priest, when he was presented in the Holy Place, in the name of the Children of Israel. The breastplate features 12 gemstones each attributed to one of the 12 Tribes of Israel. As a result, this section of the Biblical text gives us a Biblical grounding for an occult correspondence list linking 12 stones to the 12 Tribes, and as such, a basis for talismanic magic. 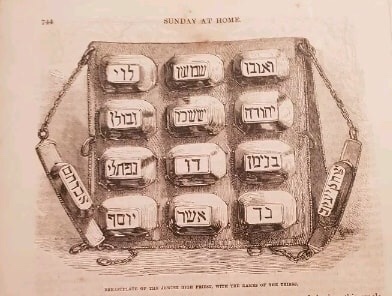 “According to the description in Exodus, this breastplate was attached to the tunic-like garment known as an ephod by gold chains/cords tied to the gold rings on the ephod’s shoulder straps, and by blue ribbon tied to the gold rings at the belt of the ephod. The biblical description states that the breastplate was also to be made from the same material as the Ephod—embroidery of 3 colors of dyed wool and linen—and was to be ⅓ of a cubit squared, two layers thick, and with four rows of three engraved gems embedded in gold settings upon it, one setting for each stone. The description states that the square breastplate was to be formed from one rectangular piece of cloth—⅓ of a cubit by ⅔ of a cubit, folded so that it formed a pouch to contain the Urim and Thummim. 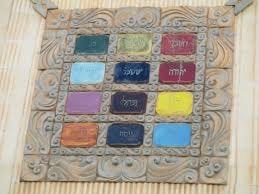 The Hebrew term for the breastplate, חֹשֶׁן(ḥōšen), appears to be named from its appearance, probably derived from the same source as Arabic حسن (ḥasuna), meaning “to be beautiful”. The 19th-century German biblical scholar August Dillmannthought that it was more likely to be derived from the Hebrew word חֹצֶן (ḥōṣen), meaning “fold”, relating to its function.”

According to the Talmud, the wearing of the Hoshen atoned for the sin of errors in judgement on the part of the Children of Israel.” As such, it was a symbolic foreshadower of the atoning role of Christ. Framed otherwise, Christ embodied a universalized version of the Aaronic Breastplate applied to all human beings.

As a side note, the Breastplate served as a pouch for two objects which provide a Biblical basis for using divination methods to seek answers from God in the way we do in contemporary Judaeo-Christian magic. “1 Samuel 14:41 is regarded by biblical scholars as key to understanding the Urim and Thummim; the passage describes an attempt to identify a sinner via divination, by repeatedly splitting the people into two groups and identifying which group contains the sinner.”

“In the version of this passage in the Masoretic Text, it describes Saul and Jonathan being separated from the rest of the people, and lots being cast between them; the Septuagint version, however, states that Urimwould indicate Saul and Jonathan, while Thummim would indicate the people. In the Septuagint, a previous verse uses a phrase which is usually translated as “inquired of God”, which is significant as the grammatical form of the Hebrew implies that the inquiry was performed by objects being manipulated; scholars view it as evident from these verses and versions that cleromancy was involved, and that Urim and Thummim were the names of the objects being cast.”

Has anyone attempted to construct a version of the Aaronic breastplate for use in Solomonic work? The Sixth and Seventh Books of Moses include a very different version of it, but it seems to me that a replica of the Biblical breastplate would fit in nicely with the Solomonic tradition as I see it in terms of grounding ritual technology in Biblical precedent in the same way that we use hyssop, the Solomonic Trumpet/Bell, and so on.

One thought on “The Melchizedek High Priest’s Aaronic Breastplate”