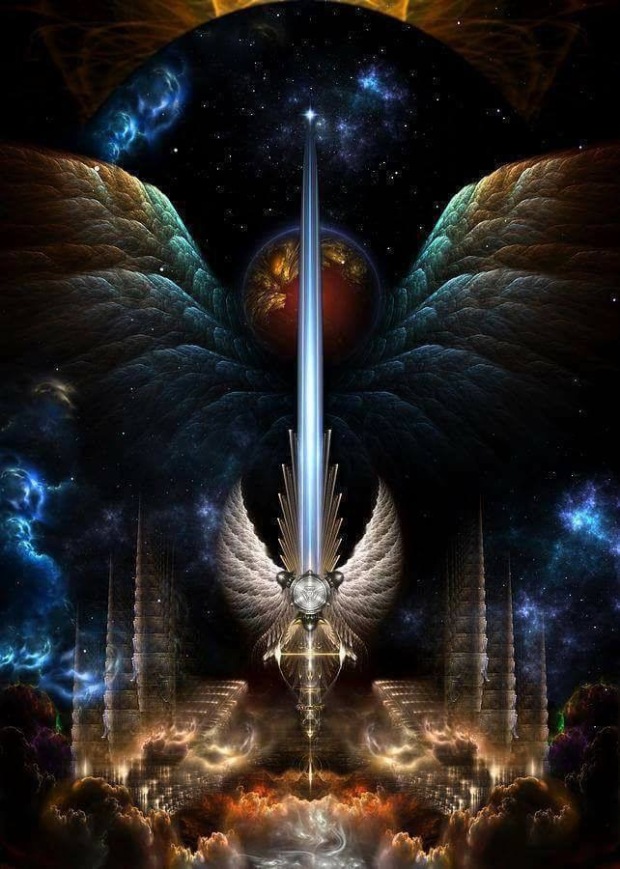 To affirm is to deny. It is obvious that we do this always, but we periodically forget because of narrowing our focus to what we affirm in the language of perceived objects and in terms of the illusive independent existence of a particular set of subjects who see those objects. We fashion a pseudo-system. The universe is boundless, birthless and partless. Both within and beyond visible space and in eternal motion within endless duration, going through apparent vicissitudes like the waxing and waning of the moon or the rise and fall of the tides, through cyclical and cosmically precise changes, human beings have the privilege of exercising the deific power of creative imagination. At the highest level conceivable to a finite mind caught up within the prison of the personality, imagination is ceaselessly enjoying the universe, for example, the play of light and shade upon the green leaves of summer. If we say that there is also continuous negation, we are correct because chlorophyll is gradually negated, and thereby the leaves turn yellow. Thus we know that spring and summer must be followed by autumn. Human beings, however, sometimes forsake these primal facts because they prefer convenient fictions which involve false affirmations.

There is the false affirmation that a whole lot of bodies are in existence today. Do the bodies say so, and if so, how do they know? Apparently they are supposed to have minds, but what is a mind and what is the evidence that bodies have minds? We entertain opinions about these matters, but are opinions the same as ideas and are ideas the efflux of fluctuating moods? Is that the same as thinking, the activity of a Thoreau in the woods and an Emerson in his study? Questions of this kind are deeply troublesome and difficult. Therefore, Sri Shankaracharya states that before you can begin to deserve the Crest Jewel, which is in the crest above the forehead of the human body, the regal gem of pure discernment and spiritual wakefulness, and before you can benefit by it in the three states of consciousness – waking, dreaming and dreamlessness – you must recognize that at the root you have made a false identification. Without knowing it, you have engaged in falsehoods to which you were invulnerable before you learned to walk, before you learned to identify with the body that stumbles and before you learned to talk, to repeat sounds associated by other people with sense-objects. You started to slip into a stupor, and began to live an increasingly unreal existence, mostly reinforcing your sense of unreality but insisting it was the only reality – thereby showing that it was not real to you – against other people’s conceptions of reality. Therefore, that compassionate teacher Sri Shankaracharya states that we must get to the root and core of illusion.

What is the root? We are told that the Crest Jewel is that which causes all our problems but which also is their cure. The Crest Jewel represents the fundamental affirmation that two habitual negatives make a higher-order affirmation. On the one hand, there is a false negation in the notion of reality attached to the apparent freedom of all seemingly separate subjects, and the resulting glamour of the false shadow-play created by supposedly separate selves. On the other hand, there is also the notion of a plurality of separate objects, constituting a false negation of the one homogeneous substance or root-matter which is of the quality of pure primordial light and remains undivided and untransformed. All the various collocations of atoms, in seemingly fortuitous movement, whirl and revolve around invisible centres which are seemingly separate points in one homogeneous universal region, giving rise to the falsehood that there are separate objects. These two false negations have been marked out in the great teaching of the Guru.

Sri Shankara begins the text by saying there are three things extremely difficult to have. One is manhood. The second is the longing for liberation. The third is access to Masters. Without the second the third is impossible and the first is useless. If one wants access to Masters, one has to long sufficiently for liberation. One has to want sufficiently, with the whole of one’s being, to become free from the massive burden of inane repetitions that we call life and the impossibility of making it meaningful with the help of borrowed, lifeless and bloodless categories that wear masks and don caps and engage in a perpetual pantomime play called living. Shankara says that there is nothing new under the sun, that it is all the same old story. One might say it began with thinking man, but it really began when man stopped thinking. As a result, a huge rigamarole emerged which men then packaged and called recorded history.

History represents in recent centuries a harsh but also a necessary negation of the absurdities, errors and illusions of the past. When that happens with so many minds, when so many wills are blunted, hearts hurt and human beings lamed and crippled, suddenly we know that springtime is near. The Golden Age is next door. Suddenly we realize what we always might have known – that there are children in this world, that other people exist, that while ten men are gloomy there are another hundred who are happy. Those who are engrossed in being happy do not go around certifying their happiness to the gloomy. The gloomy want certainty, but there is no certitude to be attained anywhere in the realm of differentiation. This is a philosophical truth which everyone knew as a little child. The intuitive negation of childhood, a beautiful sharing with no “mine” and “thine,” was followed by cruel adolescent affirmations which are intensely ugly especially to others and sometimes to oneself. Then came the prolonged adolescence of those who are petrified that they might actually have to assume minimal responsibilities. But when men will not negate, Nature negates. Nature’s power of negation is vaster than the collective power of negation of history, and both seem more awesome and decisive than the capacity of an individual to negate.