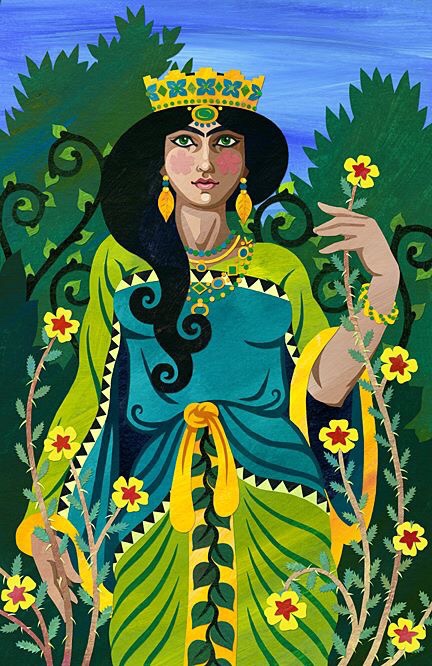 It was probably in the reign of this monarch that the queen known in legend as Semiramis lived. It would have been wonderful indeed had the magic of her name not been connected with romance by the Oriental imagination. Semiramis ! The name sparkles and scintillates with gems of legend and song. Myth, magic, and music encircle it and sweep round it as fairy seas surround some island paradise. It is a central rose in the chaplet of legend, it has been enshrined in music perhaps the most divine and melodious which the songful soul of Italy has ever conceived—yet not more beauteous than itself. Let us introduce into the iron chain of Assyrian history the golden link of the legend of this Helen of the East, and having heard the fictions of her greatness let us attempt to remove the veils which hide her real personality from view and look upon her as she was—Sammuramat the Babylonian, queen and favourite of Samsi-Rammon, who crushed the assembled armies of Media and Chaldea, and whose glories are engraved upon a column which, setting forth the tale of her conquests, describes her in all [Page 25] simplicity as “A woman of the palace of Samsi-Rammon, King of the World.”

Legend says that Ninus, King of Assyria, having conquered the Babylonians, proceeded toward Armenia with the object of reducing the people of that country. But its politic king, Barsanes, unable to meet him by armed force, made a voluntary submission, accompanied by presents of such magnificence that Ninus was placated. But, insatiable in his desire for conquest, he turned his eyes to Media, which he speedily subdued. His next ambition was to bring under his rule the territory between the Tanais and the Nile. This great task occupied him for no less than seventeen years, by which time all Asia had submitted to him, with the single exception of Bactria, which still maintained its independence. Having laid the foundations of the city of Nineveh, he resolved to proceed against the Bactrians. His army was of dimensions truly mythical, for he was said to be accompanied by 7,000,000 of infantrymen, 2,000,000 of horse-soldiers, with the addition of 200,000 chariots equipped with scythes.

It was during this campaign, says Diodorus Siculus, that Ninus first beheld Semiramis. Her precise legendary or mythical origin is obscure. Some writers aver that she was the daughter of the fish-goddess Ataryatis, or Derketo, and Oannes, the Babylonian god of wisdom, who has already been alluded to. Ataryatis was a goddess of Ascalon in Syria, and after birth her daughter Semiramis was miraculously fed by doves until she was found by one Simmas, the royal shepherd, who brought her up and married her to Onnes, or Menon, one of Ninus’s generals. He fell by his own hand, and Ninus thereupon took Semiramis to wife, having [Page 26] profoundly admired her ever since her conduct at the capture of Bactria, where she had greatly distinguished herself. Not long afterward Ninus died, leaving a son called Ninyas. During her son’s minority Semiramis assumed the regency, and the first great work she undertook was the interment of her husband, whom she buried with great splendour, and raised over him a mound of earth no less than a mile and a quarter high and proportionally wide, after which she built Babylon. This city being finished, she made an expedition into Media ; and wherever she went left memorials of her power and munificence. She erected vast structures, forming lakes and laying out gardens of great extent, particularly in Chaonia and Ecbatana. In short, she levelled hills, and raised mounds of an immense height, which retained her name for ages. After this she invaded Egypt and conquered Ethiopia, with the greater part of Libya ; and having accomplished her wish, and there being no enemy to cope with her, excepting the kingdom of India, she resolved to direct her forces toward that quarter. She had an army of 3,000,000 foot, 500,000 horse, and 100,000 chariots. For the passing of rivers and engaging the enemy by water she had procured 2000 ships, to be so constructed as to be taken to pieces for the advantage of carriage : which ships were built in Bactria by men from Phoenicia, Syria, and Cyprus. With these she fought a naval engagement with Strabrobates, King of India, and at the first encounter sunk a thousand of his ships. After this she built a bridge over the river Indus, and penetrated into the heart of the country. Here Strabrobates engaged her. Being deceived by the numerous appearance of her elephants, he at first [Page 27] gave way, for being deficient in those animals she had procured the hides of 3000 black oxen, which, being properly sewn and stuffed with straw, presented the appearance of so many elephants. All this was done so naturally that even the real elephants of the Indian king were deceived. But the stratagem was at last discovered, and Semiramis was obliged to retreat, after having lost a great part of her army. Soon after this she resigned the government to her son Ninyas, and died. According to some writers, she was slain by his hand.

It was through the researches of Professor Lehmann-Haupt of Berlin that the true personal significance of Semiramis was recovered. Until the year 1910 the legends of Diodorus and others were held to have been completely disproved and Semiramis was regarded as a purely mythical figure. Old Bryant in his Antient Mythology , published at the beginning of last century, proves the legendary status of Semiramis to his own satisfaction.

“It must be confessed that the generality of historians have represented Semiramis as a woman, and they describe her as a great princess who reigned in Babylon ; but there are writers who from their situation had opportunities of better intelligence, and by those she is mentioned as a deity. The Syrians, says Athenagoras, worshipped Semiramis, and adds that she was esteemed the daughter of Dercatus and the same as the Suria Dea. . . .

Semiramis was said to have been born at Ascalon because Atargatus was there worshipped under the name of Dagon, and the same memorials were preserved there as at Hierapolis and Babylon. These memorials related to a history of which the dove was the principal type. It was upon the same account that she was [Page 28] said to have been changed to a dove because they found her always depicted and worshipped under that form. . . .

From the above I think it is plain that Semiramis was an emblem and that the name was a compound of Sama-ramas, or ramis, and it signified ‘the divine token,’ a type of providence, and as a military ensign, (for as such it was used) it may with some latitude be interpreted ‘the standard of the most High.’ It consisted of the figure of a dove, which was probably encircled with the iris, as those two emblems were often represented together. All who went under that standard, or who paid any deference to that emblem, were styled Semarim or Samorim. It was a title conferred upon all who had this device for their national insigne.”

There is much more of this sort of thing, typical of the mythic science of the eighteenth and early nineteenth centuries. It is easy to see how myth became busy with the name of the Assyrian Queen, whose exploits undoubtedly aroused the enthusiasm not only of the Assyrians themselves but of the peoples surrounding them. Just as any great work in ancient Britain was ascribed to the agency of Merlin or Arthur, so such monuments as could not otherwise be accounted for were attributed to Semiramis. Western Asia is monumentally eloquent of her name, and even the Behistun inscriptions of Darius have been placed to her credit. Herodotus states that one of the gates of Babylon was called after her, and that she raised the artificial banks that confined the river Euphrates. Her fame lasted until well into the Middle Ages’, and the Armenians called the district round Lake Van, Shamiramagerd.

There is very little doubt that her fame became mingled with that of the goddess Ishtar : she possesses the same Venus-like attributes, the dove is her emblem, and her story became so inextricably intertwined with that of the Babylonian goddess that she ultimately became a variant of her. The story of Semiramis is a triumphant vindication of the manner in which by certain mythical processes a human being can attain the rank of a god or goddess, for Semiramis was originally very real indeed. A column discovered in 1909 describes her as “a woman of the palace of Samsi-rammon, King of the World, King of Assyria, King of the Four Quarters of the World.”

This dedication indicates that Semiramis, or, to give her her Assyrian title, Sammuramat, evidently possessed an immense influence over her husband, Samsi-rammon, and that perhaps as queen-mother that influence lasted for more than one reign, so that the legend that after a regency of forty-two years she delivered up the kingdom to her son, Ninyas, may have some foundation in fact. She seems to have made war against the Medes and Chaldeans. The story that on relinquishing her power she turned into a dove and disappeared may mean that her name, Sammuramat, was easily connected with the Assyrian summat , the word for ‘dove ’; and for a person of her subsequent legendary fame the mythical connection with Ishtar is easily accounted for.