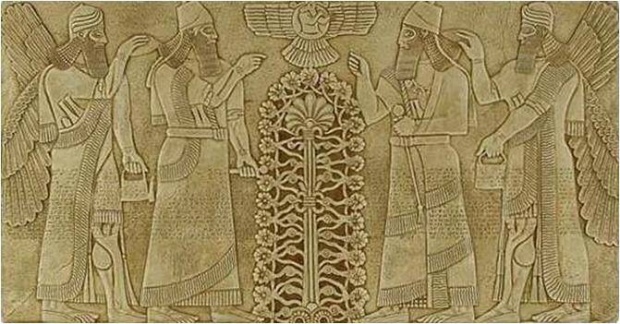 The Druids are associated with groves and, as some will insist, oak trees. However, it is feasible to suggest that in light of their Sumerian and Ubaid origins, the Druids as priest kings of the Dragon, were connected specifically with the Tree of Life and the Tree of Knowledge, rather than with any mundane or temporal shrubbery.

Accepting this we may further suggest that, as priests of these pre-eminent Trees of Life and Knowledge, they may be further identified with those magicians and scholars whose Transylvanian descendents were the Scythian Aryans or Sumerian Anunnaki–the Dragon God-Kings. They were instrumnental in establishing the Chakric system of Hindu and Buddhist Tantra and Hebrew, Arabic and Greek Qabalah whose magical systems, as we all know, contain a glyph called the Tree of Life.

Generally speaking this Tree is a system of pathways both macrocosmic and microcosmic in nature. It links the various subtle energy centres which are said to exist both in the universe, as levels of density and emanation relating to the manifestation of cosmic power and being, and in the human body–on the microscopic level–as energy centres corresponding to the glands in the endocrinal system. In Qabalah the spheres which do not relate to the glands may be seen as points in the meridian system adopted by the Chinese. On another level, the Qabalistic Tree of Life is a genealogical chart of the Gods.

The magical Tree is a universal symbol. As in the early Sumerian depiction of the Tree of Life, the abode of Lilith, many of the subsequent Arabic, Indian and European Holy Trees share common attributes. All have residing in their topmost branches some form of bird.

In Tantra it is the Swan, whose head rests within the Ajna Chakra which corresponds to the pineal and pituitary glands and the corpus callosum. In Welsh Druidic lore the bird is represented as the Eagle, a typically shamanic totem bird which symbolises the ascendant spirit. Here the Eagle is the god Lleu (in Ireland he is the Danaan king Lugh), the father of the Elven Llewwlyn Kings of Gwynnedd. In Arabic Sufism the bird is a Peacock, whilst in Viking lore the Sacred Tree Yggdrasil has at its base a coiled serpent by a pool and in its highest boughs the bird of the released spirit accompanied by a white heart. Yggdrasil is called the Axis Mundi and is seen as the tree which contains within its branches and roots the nine worlds of the Viking philosophical sytem, including their version of the Hebrew Qlipphoth or underworld. Immediately the similarity between it and the Qabalistic and Tantric Trees becomes apparent. This is no fluke.